The Sith of May 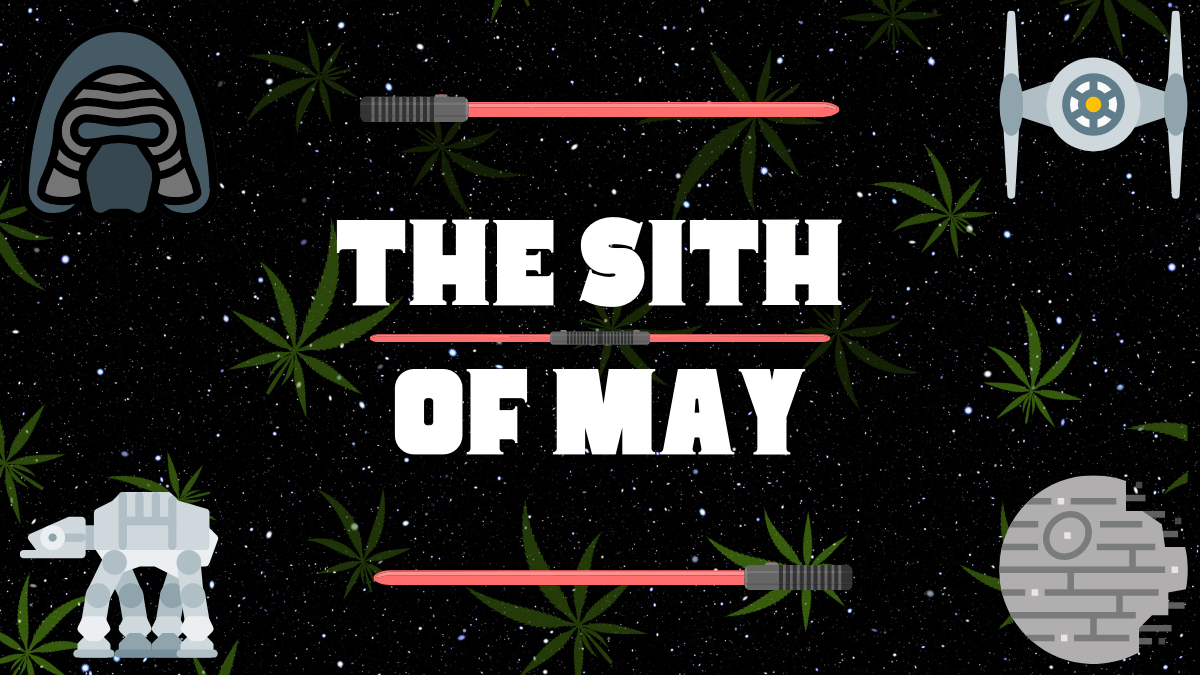 On May 4th you rebel scum had fun blasting your May the 4th be with you all day long. Now it is time for the dark side to rise once again. The Sith of May is upon us and I am here to remind you, you are inferior. You may think you are winning the war, but the empire controls the scheduling of your precious freedom.

Though there are those throughout the empire beginning to stand with the rebel scum who opposes prohibition, their actions are meaningless. They are nothing more than puppets of false promise we have put out there so we can learn who you are. We are always watching. We are waiting in force with helmets and shield prepared to clash with rebel scum at any moment.

You are allowed freedom as long as you keep it to yourself. Express yourself in a way that we do not see fit and our troops will find you. This is a direct message from the empire reminding you who is in control. We hope you enjoyed the fourth, but your time has come and gone. The empire shall rule the galaxy and enforce its laws accordingly.

I am only warning you as I am a Sith, not a Sith Lord. My masters are not as forgiving as I. When they realize your lack of loyalty to the empire, the consequences will be great. Even I cannot disobey my masters. OG1 was wise to hide you all from me. Remember, you don’t know the power of the dark side of the force. The Empire shall rise to control all including these force promoting cannabis strains.

Star Warz is an out of this world Indica dominant cannabis strain producing potent buds. THC levels average around 24% or more. This strain is said to be a combination of Warlock and Sensi Star. Those who have tried this strain say it has a pungent earthy taste with a skunky Kush like finish.

Darkside may just lure you there as it was created crossing Hellfire OG with Light Saber. The aroma is said to smell like berries and rotten lemons. THC comes in extremely high averaging between 25 to 30% or more. The flavor profile is described as floral and sour.

Light Saber is a combination of Predator Pink mixed with Starfighter F1 and a Jedi’s best friend. This Indica dominant strain of cannabis has a unique aroma that is described as smelling like root beer. THC on this one averages somewhere between the neighborhood of 18 to 24% or more.

Skywalker OG is an indica dominant variety of cannabis. You’ll feel the force with this strain as it tests with an average THC level of around 21% or more. The flavor is said to be sweet and citrusy with hints of pine and a gassy finish.

Jedi Kush is an Indica dominant variety of cannabis. A couple of hits of this and you’ll be feeling the force. It is said to be a cross of a SFV OGK F5 mixed with Death Star. THC levels come in pretty strong averaging around 22% or more. The buds are said to have a sweet hash like taste with a candy-like lemon finish.

C-3PO might leave you energetic and rambling on like the interpreter Droid C3PO in the movies. C-3PO is a mild high CBD sativa dominant hybrid. THC with this strain usually comes in very low somewhere between 1 to 3%, but CBD tests on average somewhere between 13 to 15%. The flavor profile is described as earthy with a piney finish.

R2D2 is a fiery little droid and a mysterious strain of cannabis. It is said to be produced in Oregon. Other than that not a lot is known about it. Only two reviews can be found on Leafly. One says it was fire the other says it’s whacked. If you get a chance to try this cannabis strain, let us know what you think.

Palpatine is a sativa dominant cannabis strain. It was created crossing Grandpa’s Breath with Death Star hence the name Palpatine. We know that guy had old man breath just by looking at him in the movies. THC averages somewhere around 20% or more. The flavor profile is said to be earthy and sweet with a funky pungent finish.

Ewok is an Indica dominant variety of cannabis and an adorably loved or hated character from the Star Wars franchise. THC averages come in somewhere between 18 to 24%. The flavor profile is said to be skunky and sweet with a pleasing earthy finish. Smoking too much of this and you might find yourself trying to cook droids.

Wookies is an Indica dominant variety of cannabis. It is said to be a cross of White 91 and Girl Scout Cookies. THC averages somewhere between 18 to 24% with this strain. The flavor profile is described as minty and sweet with a pungent pleasing cookie-like finish. They say once you’ve tried this strain, you’ll be drawn to it like Chewy to a meat trap.

Chewbacca is rumored to exist in the cannabis world and to be an extremely potent strain testing above 30% THC. Not much is known about this wookie other than it is a rare indica that very few ever get a chance to fill their lungs with.

Jawa is an Indica dominant hybrid. It was created crossing Jawa Pie and Ghost OG. THC levels are said to average around 15% or more. The flavor profile is supposed to have an earthy herbal floral flavor with a slight hint of incense. Don’t store your weed in your tobacco store bag or your papers with your incense and you might get rid of that last flavor. You know those Jawas though, their collectors of everything.

Stormtrooper is a 90% Indica dominant cannabis strain. It was created crossing Jedi with Crystal Storm. THC levels have come in insanely high with some reporting as high as 45%! The flavor is said to be sweet and buttery with a distinctive Kush and diesel-like finish. With THC levels that high no wonder they created a clone army!

Darth Vader OG is a 50/50 hybrid cannabis strain. This variety of cannabis was created crossing Afghani with a pure Kush. THC comes in testing somewhere between 18 to 24% or more. The flavor profile is earthy and sweet with hints of grape and a funky sour finish. Careful as this one might leave you having conflicted feelings.

Master Jedi is a 50/50 hybrid cannabis strain. It is said to test at around 18 to 22% THC. The flavor profile is tasty with hints of caramel and coffee wrapped up by a citrusy piney finish. After a few hits of this you may not be a Master Jedi but you definitely will be Master Red Eye.

Han Solo OG or sometimes called the Han Solo Burger is a 70% sativa dominant cannabis strain. It tests extremely high for THC averaging 25 to 30%. The flavor profile is spicy with hints of pine and a sweet candy-like finish. Careful with this strain because by the time you come down you might realize you’re not Han Solo and what you thought was Chewbacca is just some wild furry beast.

Princess Leia Kush is an 80% sativa dominant cannabis strain that may just give you the energy you need to swing into action. It was created by crossing  Cindy 99 and Lemon Alien Dawg. THC levels average somewhere between 22 to 28%. The flavor profile is sweet and earthy with tropical flavors of citrus and pineapple followed up by a sour candy finish.

Death Star is an 80% Indica dominant cannabis strain. When you’re ready to get blasted like the planet Alderaan fire up some of this potent cannabis that tests at an average of 20 to 25%! The flavor profile is said to be sweet and earthy with hints of Kush and Diesel.

Yoda OG is a 50/50 hybrid cannabis strain. THC levels test on average between 15 to 20%. The flavor is said to be sweet with hints of lemon and pine. Star Wars fans everywhere love this one as it has them screaming “Yoda one for me!”

OG1 Kenobi is an Indica dominant cannabis strain. THC is said to average around 21%. The flavor is rumored to have hints of Kush and pine with a skunky finish. The strain is said to be great at helping the body. If you’re suffering from pain or emotional stress OG1 Kenobi may be your only hope. Well not actually, but it’s worth a try regardless.

If you loved this article and strain suggestions, be sure to share with your friends and follow @CannaLance on social media!