WE ARE WITH DOM 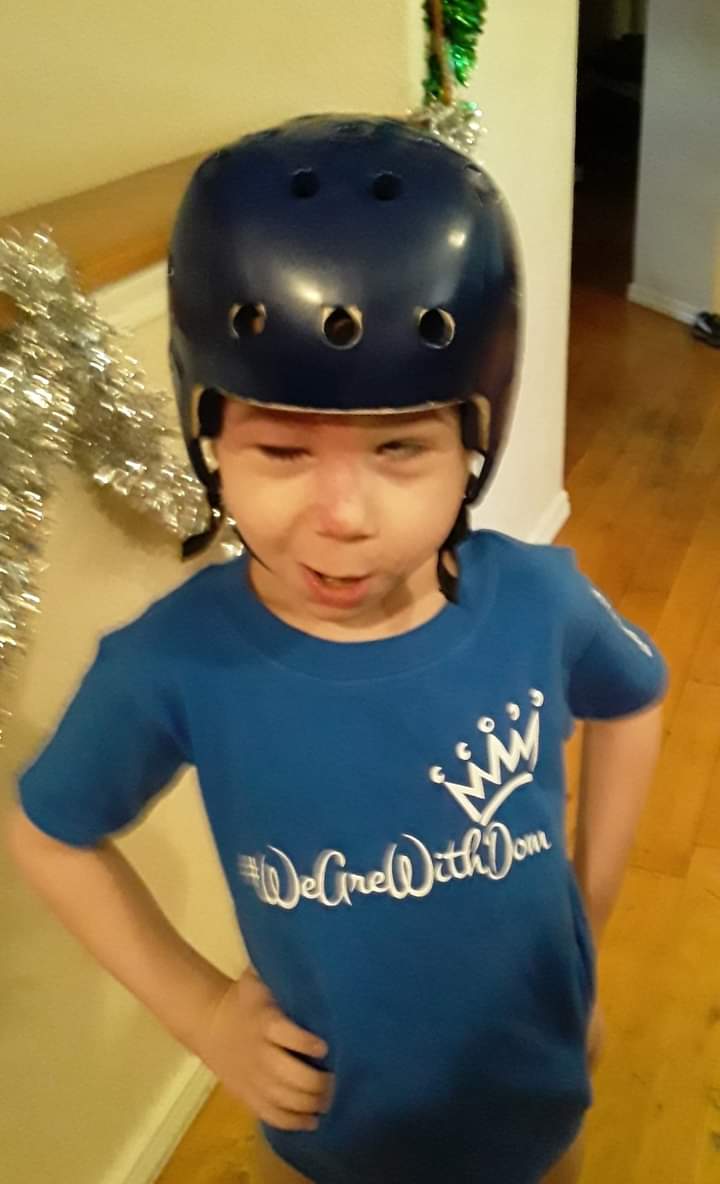 As a parent, the love for our children is the greatest we ever experience. We would do anything for them. When they suffer, we suffer. It is as if we feel their pains. We try to protect them while they grow and keep them out of harm’s way. Imagine having that love for your child but not knowing whether they will open their eyes and wake up each day. Imagine watching them have a life-threatening condition that took control of their body, ravishing every inch of it—from loss of muscle control to chemical imbalances with the body having both good days and bad days.

Instead of getting a good night’s rest, you’re up all night, taking shifts with the other parent watching over your sick child. Many parents in this situation often end up with the child sleeping in their room with them or even in their bed. This is so if they have a seizure or choking in the middle of the night while sleeping, the parents can give them rescue medication. You want the best for your baby and always hope that medical advancements will find a way to help them.

Imagine having to watch them grow up and lose control of their muscles being confined to a wheelchair while other children run about and play. Imagine having to worry about if they’ll even have this opportunity. This is precisely what many parents across the country go through and are going through right now. Cannabinoid therapies are not a cure-all but offer many families hope where other traditional forms of medicine have been exhausted and only brought about more side effects and issues.

Are you with Dom? When it comes to the answer to that question, my best guess is yes, you are. I’d like to introduce you to Ed and Emily Merrow. Ed and Emily are from Kansas City, Missouri. They have a beautiful family of seven, including themselves and five children, Monty, Dillan, Katrina, Serenity, and Dom. Their lives in Kansas City were changed entirely forever when their last child Dom was born. Dom was born with a condition that affects one out of every 20,000-50,000 babies born in the US. Of those affected, one out of a thousand are born with what is called a port-wine stain, a sign of a genetic disorder.

The condition Dom has is called encephalotrigeminal angiomatosis or Sturge Weber Syndrome (SWS). SWS is a mutation found in the GNAQ gene affecting blood vessel growth, causing severe epileptic seizure activity. He wears a helmet to protect his head and must be watched at all times. According to the National Library of Medicine, “Sturge-Weber syndrome is a condition that affects the development of certain blood vessels, causing abnormalities in the brain, skin, and eyes from birth. Sturge-Weber syndrome has three major features: a red or pink birthmark called a port-wine birthmark, a brain abnormality called a leptomeningeal angioma, and increased pressure in the eye.” There is no cure for this condition, only treatment options.

Treatment options are a mix of anticonvulsant medications and surgical removal of epileptic brain tissue. Doctors told Ed and Emily to prepare for the worst. After exhausting all medical options available to them, they did what so many other parents with sick children are doing. They uprooted their family and moved to Colorado. The reason For Colorado was for access to legally try treating Dom’s SWS with cannabinoid therapies. Ed and Emily were tired of watching Dom suffer from chronic pain, seizures, muscle tone loss, memory loss, and constant nocturnal seizures that could take his life at any time. A lot of parents have seen success with cannabis treatments for their sick children. Cannabis is by no means a cure-all. However, it seems to offer many children like Dom who suffer from debilitating conditions, a higher quality of life.

Life Before Colorado and Emergency Protocols

Little Dom was on a basket of prescription drugs before moving to Colorado. Now, he only takes two pharmaceutical prescriptions, oxcarbazepine, and Divalproex, which he takes in conjunction with THC/CBD tinctures and oils. Dom’s seizure activity needs to be monitored very closely. If he has one that lasts longer than five minutes, emergency actions must take place immediately. In this case, Dom has to be administered rescue medication, and an ambulance must be called. The rescue medication is called midazolam, an intranasal mucosal delivered drug. Dom gets 2ml of midazolam, 1 ml in each nostril. To avoid this situation from happening, Dom takes a full extraction cannabis oil (FECO) tincture produced by the Hope Grow’s Foundation twice daily.

Dom’s environment must be watched closely. If it gets too hot or too cold, it could stimulate seizure activity. In the state he was born in, Dom would most likely not be with us still. Like so many in his position, the drugs that are supposed to help are often ineffective. That or they do more harm than good. Cannabis is helping children like Dom have a fighting chance at life. To treat Dom legally in Colorado, Ed and Emily have to have two med card referrals to get the state-issued MMJ card, which comes at a hefty price. They also know they will need things like a wheelchair in the not too distant future with Dom’s condition.

Lend a Helping Hand to Brighten a Little Boy’s Face

If you would like to help this amazing family out with covering general expenses, a wheelchair, or something extra to put a smile on Dom’s face (he loves Batman), contact us here at CannaLance, and we’ll put you in touch with the Merrow’s.

You can also show your support by purchasing a “We Are With Dom” t-shirt from MTM Fashions by contacting Dom’s Dad Ed Merrow and by sharing this article with the hashtag #WeAreWithDom!