Tennessee sees progress with medical cannabis for the first time since prohibition began. Well kind of. Memphis and Nashville TN sort of decriminalized cannabis for a short while but officials reversed that as quickly as they could.

It’s as if their investors I mean contributors threatened to pull out I mean back out of continued support or something. In March of 2017, Republican Rep. William Lamberth sponsored the bill that passed and blocked the people of the state of TN from decriminalizing cannabis anywhere.

If you want to see a change in the state of Tennessee and for it to catch up with the rest of America, politicians like Republican Rep. William Lamberth must learn and accept the truth about cannabis or he must be voted out of office. Remember he stands against a natural medicine with zero deaths and centuries of medical documentation in favor of something else that is deadly.

The very thin and heavily revised medical cannabis bill presented by Tennessee Republican representative Jeremy Faison passed 9-2 in the criminal justice committee giving some patients hope. It doesn’t legalize cannabis. Instead, it offers a legal defense for someone who is arrested and prosecuted for cannabis, as long as they have a doctor’s note prescribing the product per the Tennessean. It’s rumored you need a note from your mom too!

A big thank you to Mr. Faison for tiptoeing around the tulips with these political clowns. Sadly, the law has may issues. Issues that tend to make folks in TN wonder why they are being denied the same freedoms as other places in America.

The proposed bill allows for no flower or concentrates. It provides no access to cannabis in the state of Tennessee. So how do patients get meds? Illegally of course. That makes perfect sense. Sure, go get a med card elsewhere. Sure, bring your meds back here. If you make it home we’ll leave you alone, maybe. #WTFTN?

Have They Heard of the Opioid Epidemic and Did the State Just Suggest Drug Trafficking?

Basically, the state of Tennessee is telling patients if they want their medicine get it at their own risk by trafficking it across the country from someplace that has medical cannabis access aka real American freedom.

Make it to the TN state line and you canna have the oil we encouraged you to illegally drug traffic from another state, maybe. But, only after we prove you didn’t write your doctor’s note or forge your moms signature. So confusing. What other laws is it ok to bend? Deforesting? What about air pollution? Or cable company fraud? Wow to be a politician today. Most of the really are a special kind of stupid. It’s great to see progress, but to me it’s sad that this is what the political leaders in the Volunteer state consider progress.

We need elected officials that will help Tennessee prosper and rise out of the problems we face. Problems like prescription drug abuse where Tennessee holds the bragging right of being above the national average per the CDC.

Who do you think is selling these drugs? Where do these pills come from? Hippies aren’t growing Percocet plants or Oxycotin trees in their basements and backyards. This dope is coming from people who wear lab coats.

Pill pushing doctors and cash-hungry patients make up the source of the problem. Have you heard of the “KingPin Granny” who was recently busted here in Tennessee? This is part of why the problem is so bad. It’s not just street corner thugs selling these drugs. It’s people you would never suspect.

“As part of a long-term investigation, detectives in Decatur County — a county of 12,000 people 100 miles west of Nashville — said they found more than 1,000 prescription pills, including morphine, Oxycodone, Xanax, and more than $12,000 during a search of Jordan’s home in Parsons Feb. 9.”- Patch.com

The opioid epidemic is real and it’s real bad in TN. The state has 9 methadone clinics near major metropolitan areas to service addicts. In July The Centers for Disease Control and Prevention released a report showing morphine equivalent milligrams per capita annually for counties across the U.S.  Guess what TN? Three Tennessee counties made the top twenty nationally! Way to go Cocke, Campbell and Claiborne County! 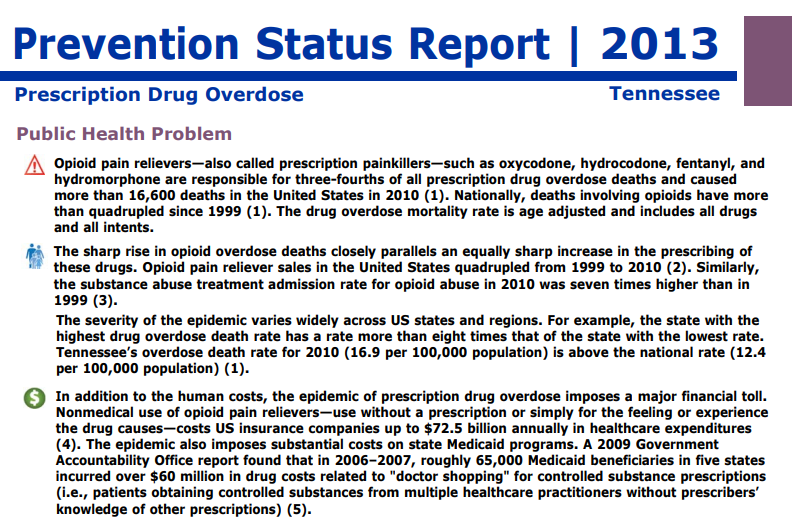 Cannabis can help this. States with legal access to cannabis see as much as a 25% reduction in prescription pain pill overdoses and deaths. It’s not 1937. The people are learning the truth that cannabis is a medicine. The propaganda of Reefer Madness has failed. Profits will drop unless you adapt to change. You can’t continue to manipulate the people in favor of increased revenue any longer.

In the spirit of the Volunteer State, Tennessee should volunteer to lead the way into positive cannabis reform laws in the south. Someone must do it. What are we waiting on, South Carolina to lead the way for the southern states again? That didn’t work so well the first time.

It’s time to grow up. Tennessee politicians must support the will and vote of the people and not a private agenda. Legalize cannabis and let’s work on other vital areas in TN like health care, schools, renewable energy, and more.

Many people in TN that I’ve spoken with are afraid to support cannabis openly because of the fear of prosecution and incarceration. It’s like a bunch of bullies run the state. Let’s change this. Living on Tennessee time doesn’t have to mean slower because of prescription drug abuse. Let’s work together to take the hospital out of southern hospitality and make Tennessee a place that is hospitable to cannabis consumers and patients.

Are you curious to learn more about how cannabis prohibition came to be and who supports it? If you said yes, then check out “Did You Know This About Cannabis” authored by the husband and wife team of James and Ashley Priest at CannaLance on Amazons Kindle market. Thank you for your support. Remember you are a seed. Each and every one of us who supports this plant is. A single seed is all it takes to tip the scales of injustice.

2018-03-29
Previous Post: The Hope Grows Foundation Holy Anointing Oil is Heavenly
Next Post: Cannabis Is Worth How Much?