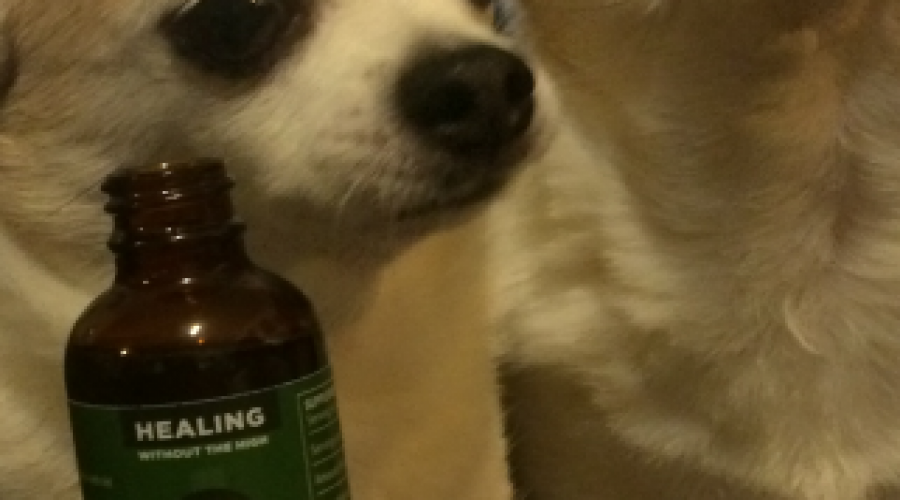 PORTLAND, OR – February 1, 2017 – Healing Without the High (HWTH), a holistic health pet provider integrating Cannabis into veterinary care, today announced Premium Hemp Pet Tinctures to work with your pets endocannabinoid system. Your pets endocannabinoid system (ECS) is systemic, which means it is all through their system. Their main cannabinoid receptors in the ECS are the CB 1 and CB 2 receptors that are naturally occurring (endogenous) receptors concentrated in areas of the brain and the peripheral nervous system.

This system of receptors and internal ligands are chemical signals that bind with those receptors that modify the disease processes. “In therapeutic use, CBD alone is less effective than the whole plant as it lacks the secondary cannabinoids that are in the resin offering the entourage effected,” said Goldie Berencsi, Founder of Healing Without the High. “ We are augmenting the endocannabinoids that we produce internally and asking the receptor system to respond in a positive way to modify that physiology in certain conditions.”

“Our goal at HWTH is to relieve pain and suffering while enhancing the quality of life for pets and their guardians,” said Berencsi In 2001 John McPartland and Russo published a paper in the Journal of Cannabis Therapeutics applying the “entourage” concept to the plant itself. “Good evidence shows that secondary compounds in cannabis may enhance the beneficial effects of THC and reduce THCinduced anxiety cholinergic deficits, and immunosuppression,” they wrote. “Cannabis terpenoids and flavonoids may also increase cerebral blood flow, enhance cortical activity, kill respiratory pathogens, and provide anti-inflammatory activity.”

Gino had been diagnosed with Lung Cancer by our vet and HWTH was our last resort. Goldie and her team were the consumate professionals at a very difficult time in our lifes, her consultation explaining the science in a cannabis therapy made perfect sense. We are grateful to have discovered this product allowing us a little more time with him. Jan 3rd Gino turned 15! said Alexander.

Animals have CB-1 receptors in the brain and CB-2 receptors in the central or peripheral nervous system that regulate the immune system. Cannabinoid receptors are sensitive to Δ9- tetrahydrocannabinol (Δ9-THC, commonly called THC), which is the primary psychoactive cannabinoid found in cannabis. The 2-AG is an endocannabinoid, an endogenous agonist of the CB1 receptor. It is an ester formed from the omega-6 fatty acid arachidonic acid and glycerol. It is present at relatively high levels in the central nervous system, with cannabinoid neuromodulatory effects stimulating receptors in your pets brain and throughout the body.

The cannabinoids in cannabis attach to those same receptors. However, they resist letting go of those receptors so their effect is more powerful and longer lasting. Drugs that hang on to receptors longer than the natural messengers are called an agonist. The chief agonist cannabinoids in cannabis are Δ9-tetrahydrocannabinol (aka THC or delta-9) and cannabidiol(aka CBD). The effects of cannabinoids wear off when processed (metabolized) by the pet’s liver into compounds that leave through the bile and urine or stored in the pet’s body fat.

About Healing Without the High

Healing Without the High is a Portland, Oregon-based company are the makers of Premium Hemp Pet Tincture, a cannabis pet tincture designed to work with an animals endocannabinoid system through cannabidiol (CBD) a phytocannabinoid derived from cannabis. Our whole plant extract contains a full spectrum of naturally occurring synergistic cannabinoids and terpenes with five cannabinoid-based products to follow.

Visit http://www.healingwithoutthehigh.com for more information or send an email to info@healingwithoutthehigh.com. Goldie Berencsi is a formally trained, licensed holistic pet practitioner and cannabis nutraceutical product developer for animals in Portland, Oregon who is passionate about the use of botanicals for improving pet health as well as pain management. Their sister company K9Herbalist, a mobile holistic pet service will be merging with Healing Without the High in March 2017.

If you are looking to make some great recipes using[...]

OverGrow Canada and Over Come the Negative Stigma

Dana Larsen is giving away 1 million cannabis seeds in hopes of OverGrowing Canada!

On Cloud 9 with Barbara Biddle and District Hemp

CBD has been making waves throughout the health community worldwide[...]