In Case You Missed it!- Blazing High Hopes for Cannabis to Be Rescheduled

February 19, 2016 Posted by CannaLance Culture and News No Comments

The FDA has sent a recommendation to the DEA in regards to whether cannabis should be reclassified according to the Controlled Substances Act. This is in light of two pending petitions to reschedule cannabis to reflect it’s medical uses. We do not yet know what their recommendation is but we do know that they are taking actions behind the scenes at this time. This is thanks to a letter sent to the Attorney General in August by Congressman Earl Blumenauer and the response he received back in September from the Assistant Attorney General Peter Kadzik that was just recently made public.

Any cannabis activist or medical marijuana patient for that matter will tell you that cannabis in no way should be a Schedule 1 drug according to the Controlled Substances Act or CSA, but many are not aware of what this all means. Let’s take a look at what the CSA is and what a few of the different classifications mean.

The Controlled Substances Act or CSA is a U.S. statute that prescribes federal U.S. drug policy under which distribution, manufacture, importation, possession and use of certain substances are regulated. This statute was passed and signed into law under President Richard Nixon and the 91st United States Congress. This Act is Title II of the Comprehensive Drug Abuse and Prevention Act of 1970.

Schedule Classifications Under the CSA

So now that we know what the classifications are let us take a look at how the process works to reschedule a substance under the Controlled Substances Act and where things stand at this time for cannabis in this process.

The Many Different Departments Involved in Rescheduling a Substance

There are many different departments within the government that are responsible for the process of rescheduling a substance according to the CSA. These departments include the Drug Enforcement Administration (DEA), The Department of Health and Human Services (HHS) and the Food and Drug Administration (FDA).

The Responsibilities of the HHS, FDA and DEA under the CSA

The CSA assigns the HHS with making scientific and medical determinations. The HHS in return delegates this responsibility to their FDA department. The DEA is in charge of assessing any other statutorily relevant data and also for making sure that any and every petition is handled in legal conformity with not only the CSA but also U.S. obligations under any and all international drug control treaties.

What We Are Waiting For

The DEA is currently reviewing the medical and scientific evaluations as well as the rescheduling recommendation from the FDA. Once the DEA has analyzed the recommendation provided by the FDA they will then notify the petitioners on their decision. The analysis performed by the DEA and FDA will then be added to the Federal Register. So for now, we must wait as the DEA reviews the recommendation that was received from FDA and hope for the best.

If you recall the different schedules that are a part of the CSA, it’s almost as if Cannabis does not have a suitable place among Schedule 1, Schedule 2 or Schedule 3 substances according to the CSA with the minor exception that the FDA has not approved medical use of cannabis. This is despite there being thousands of medical marijuana patients across the United States and the fact the 23 states now accept cannabis as a medical treatment at some level. Even though these states have recognized cannabis as a medicine and have granted the right to thousands of patients to choose cannabis as a medical treatment option, the FDA has not endorsed or approved cannabis as medicine.

We know that the government owns patent US6630507on cannabinoids that explicitly states that cannabinoids have antioxidant and neuroprotectant properties. We also know that the US Cancer Society has admitted to research that has proven cannabis can kill some cancer cells and inhibit the growth of tumors. These definitely seem like  acceptable medical uses to us. We can only hope that there is enough research and enough statistics to make them change their position on this classification. Mike Liszewski of American for Safe Access stated that “We hope the agencies will become more transparent and give medical marijuana patients the respect they deserve.” We couldn’t agree more Mike. Cannabis is medicine and it is high time that we treat it as such! 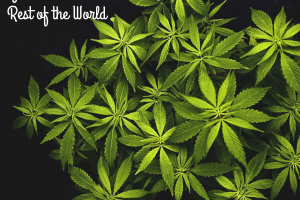 The U.S. is Light Years Behind the Rest of the World

Cannabis legalization seems to be moving ahead at full steam[...]

Thoughts from a teen growing up… in the midst of a weed revolution!!!!!

Thoughts from a teen growing up… in the midst of[...]