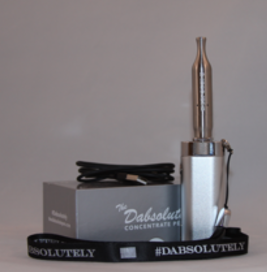 The Dabsolute Concentrate Pen is ingenious and sensational! Over the past few years, I have started to enjoy dabs more and more. The high is clean, and it’s a strong one. Dabs would be the perfect solution for me if I could take them everywhere. The problem with that is, where I live you can’t smoke marijuana in public. This means it’s particularly hard to set up your dab rig at the park, zoo, or on the busy downtown street having lunch. Not with The Dabsolute Concentrate Pen.

The professionals at The Dabsolute Concentrate Pen came up with a solution to this with their amazing portable concentrate pen. First of all, I have to say this is dabsolutely an incredibly crafted, top-quality device. It looks just like many of my friend’s nicotine vape pens in which they smoke Banana Nut Muffins, Tootsie Rolls, and Unicorn Farts. I quit smoking tobacco a year ago, so I’ve never had a need for one of these vape pens until now.

Now if you had told me I could get a super dab rip off of one of these pens most likely I wouldn’t have believed you before I tried The Dabsolute Concentrate Pen. I’m used to a rig or globing it on a bowl or joint even. When I tried my first draw off The Dabsolute Concentrate Pen, I didn’t know what I was getting myself into and nearly coughed up a lung. Discretion is key and knowing your limits so as not to turn into a coughing snot-ball on the sidewalk, really helps when you are looking to maintain your medication level discreetly amongst the public.

I take my Dabsolute Pen everywhere. This thing stayed by my side for an entire week. In the car, walking down the street, in the grocery store, at the park, even in the mall during my Christmas shopping. Nobody recognized or suspected anything out of the ordinary. When I stepped outside to the smoker’s circle in front of the mall, everybody was puffing away on their, vape pens. I pulled out my Dabsolute and hit it 2 or 3 times and went on about my business without anyone notice anything. Slick design Dabsolute Pen! Plus I got an amazing Dabsolute Beanie!

My hits were easy to figure out how to control. The Dabsolute Concentrate Pen has multiple settings for the wattage and voltage to control how the coil heats up. The coil was amazing as well. It was like a stove burner in a vape pen! The easy push button function was almost unbelievable. The Dabsolute Concentrate Pen didn’t clog on me one time. I was able to fill my pin up at home, and that was all I needed to last me through the day. I will admit there were a few occasions where I brought a little extra with me just because I’m a heavy consumer.

There were many factors in which I was remarkably impressed with The Dabsolute Concentrate Pen. First of all, it was an amazingly beautiful product, made from stainless steel. The Dabsolute name was etched on the stem with pride. There is a push button adjustable wattage that goes as high as 34.5 watts. Also, it has an LED indicator to let you know how many watts you’re set at as well as the life of your battery. This stem has the air holes above the coils, so there is never any clogging. This was dabsolutely amazing. The coil also does an amazing job heating up your concentrate.

I had the privilege of trying both BHO wax and some good hard shatter during my week of stringent testing. The Dabsolute Concentrate Pen is also 100% American-made and guaranteed for life. The only thing on The Dabsolute Concentrate Pen that wasn’t a made in America currently was the battery. Speaking of the battery, this thing really can hold a charge.

2016-01-20
Previous Post: Medical Marijuana Suppositories are Kicking Diseases Butts
Next Post: The Diversity of the Cannabis Culture- One Love Amongst the People